Last month, Ratchet and Clank kicked some asteroid with a feature film, and a Ps4 re-imagining game. While fans enjoyed the film, it fared poorly around critics and non-fans. That didn't stop the Ps4 game from becoming the best selling Ratchet and Clank game of all time–ranking #1 for the 3rd week in a row! Now Shaun McCabe, who's been with the series since Going Commando, breaks his silence on how Insomniac Games brought this gem to life.

Originally, the game's release window was 2015, which gave Insomniac only 10 months of development time. They needed to start creating the worlds from the movie: Veldin, Aleero, and Quartu. Then they could move around and add other levels, like Nebula G4, and Gaspar. Shaun still says that there were 2 new levels, but unless you count the Deplanetizor, all other worlds are returning.

Creating a movie-tie-in game became much easier when told by Captain Qwark. They were free to improvise the story as they went along. TJ Fixman and Brian Allegier worked hard to make the story fit in with the movie, but tell a different version of the events, all while making sense. Animators worked hard on in-game cutscenes, but the real enemy in play was…TIME. If you're wondering why the cutscenes looked rushed, it was because of the time constraints. They even cut some story content out of the game to enhance the flow of the plot.

Insomniac tried to use as many Ps2 assets as they could for original development. But they soon found out that they couldn't grab anything out of the Ps2 games. Instead, they went to Idol Minds for the HD trilogy on the Ps3. This helped simplify the work of building everything from the ground up. Insomniac didn't think they would be able to use movie assets in game, but were pleasantly surprised with how smooth they ran in the game engine. A few tweaks was all they needed to get them functioning perfectly. However, some Ps2 characters were re-designed to give off a more modern look.

When word of the movie's 2016 delay came out, Insomniac Games found themselves having more breathing room in development. However, it was not without challenges. Sparing all the technical jargon aside, they were able to add new features, and polish the existing features as well. 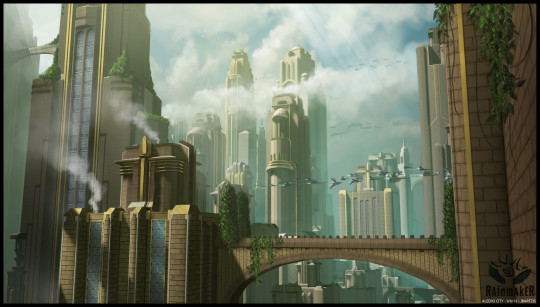 With the movie's release, came lot's of concept art. From backgrounds like Kerwan and the Deplanetizor, to character sketches like Victor Von Ion and Dr. Nefarious, it's all able to be viewed on my Ratchet and Clank Tumblr. There are even some character model concepts of certain robots, if you dare to venture that far…

So what's next for Ratchet and Clank? Shaun McCabe said he's not quite sure. They are still cleaning their hands from this entry and delving into VR games. A movie sequel is out of the picture, but with the overwelming success of this PS4 game, it seems a sequel is more than likely. But what would it be about? We will let the fans decide. Vote now on this weeks poll to see what fans are truly craving for in the future. Reach for the stars Insomniac, reach for the stars…

For any upcoming news on Ratchet and Clank, stay tuned to Ratchet Galaxy.

Vote en.ratchet-galaxy.com/ to see what the majority of fans hope for in the assumed next installment of Ratchet and Clank!

i just hope there is someway they can make a squeal, because i really want one

@Ratchetxtreme
"i just hope there is someway they can make a squeal, because i really want one

"
Well, there is no indication of a SSO 2, so perhaps Insomniac can hear to the call of fans early

Same here, however, it had some errors in it.