Published on November 28, 2012 by RatchetBlaster

Published on November 28, 2012 by RatchetBlaster

The day has come, finally, to enjoy the latest game in the series : Full Frontal Assault is now out in the US, both at retail and on the PSN.


[Ratchet & Clank are back online!]

Not only does FFA propose a short-story campaign, playable on your own or with a friend online and splitscreen, but it also brings back the series in the world of online multiplayer gaming.

Heavily influenced by MOBA games such as League Of Legend, it also takes inspiration from the tower-defense gendra to create a really unique gameplay. The traditional 3rd person gameplay with a 360° camera is back, but taken to new ground with that very special twist. 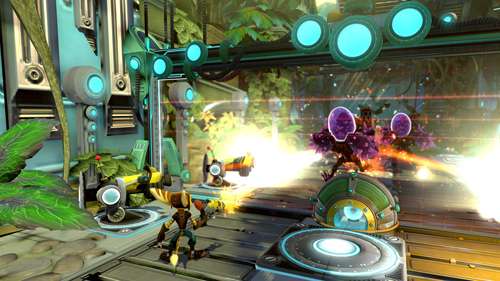 It applies both in the campaign and online, and offers a challenge which will probably surprise by its difficulty and mean a great replayability.

A new release date for the PSVita version

The game has been pushed back to January 2013 on Sony's handheld console, but the Cross-buy offer will still apply when the time comes. FFA also features Cross-save, which means your progression can be transfered and kept both on PS3 and PSVita, and Cross-play which allows you to play online against PS3 AND PSVita players !

What would be a great online multiplayer game without additionnal content ? Insomniac surely understood that and will add new skins and maps to the game over the next months.

First come new skins, and the good news is : they are free ! A nice gift to the fans. Other skins will come later at an unknown price. 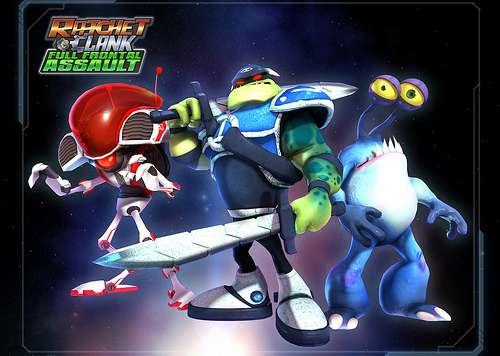 Even more great news : the additionnal maps will be free, too ! You may also be pleased to learn FFA has NO online pass.

> You can now add Full Frontal Assault to your games list via RG Gaming.

> Choose your weapon ! The artist Daniel Nyari has illustrated and put together some of the most famous weapons in the videogaming world. Will you be able to spot the weapon taken from R&C ACIT ? May I know what is your source for this, please ?

The game is amazing,perfection itself,the graphics are amazing the online gaming is addictive and fun the campaign is funny I LOVE IT

But that's not all that reliable so I found these links

I couldn't find the Future Pack or the Pirates Pack on PSN at this time.

Comment #54 confirms the price of $1.99 for three skins. Detroit (the mod) didn't argue that the price was wrong (post below it), so it must be right. Though it's just US dollars, who knows what the rest of the world has to pay?"
This game is so awesome! Drek! Tachyon! NEFARIOUS! And so much more! AWESOME! And even the smuggler! The players i always wanted to play as, and for a cheap price… i'l bet i'l gotta get some funds on my pstore account!