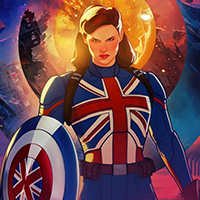 How about we look back at a year of video gaming. We had such biggies as Witcher 3 and Fallout 4. But nobody cares what the masses think was the best game of this year. No. It's about what you thought was the best game that came out this year. Any game that released in 2015, even remasters, can be chosen. List your faves below! Well this year, much like last year, was a year in which I spent the vast majority of my game-playing time with pre-2015 games. But I have played enough games to be able to create a nice little Top 5 games list.

Totally worth getting if you don't have a PS3 and do not intend to get one in the near future. The games have been properly remastered with no glitches and some very welcome additional features and control changes that made replaying them just a little less annoying. Still fun games, though.

Overrated. Journey is a really neat game, and worth a small bit of cash. But the game is short, and not worth a replay. This game must have originally released among a serious gaming drought, because I don't think it deserves all the praise people give it. Regardless, it's still a pretty fun game.

As far as arcade-top-down-shooter games go, I think this one is my favourite. I will not delete this from my PS Vita. And although it gets quite hard, you can grind your way to leveling up your guy, to do better next time. This is a welcome addition to what could have been just far too hard. This is a game to be played in short bursts. It's quite fun with friends, and even tolerable without friends. I always give this game a good go with friends as a sort of intermission between switching serious multiplayer games like LittleBigPlanet and Destiny. This game delivers about half of what we expected to deliver, but then again we expected something twice as good as every other game on Earth, so I guess it can be summed up as a great game, but a bad Metal Gear Solid game. There is no climax in this game, and feels half-finished. It leaves a Phantom Pain in the hearts of all the MGS fans. I heard a lot of people talk about Journey lately. I'm actually planning to play it in the near future. Heard people say it's a memorable experience, not much of a game. At work people keep pointing at it though like: I want to recreate that feeling. Guess I'll find out who I agree with.

I really like this sentence:
'' It leaves a Phantom Pain in the hearts of all the MGS fans''

It's sad but true. I mean the game starts building up to some build-up about half-way through (I phrased that correctly, by the way), but collapses in on itself where all other MGS games would have a massive drawn out final half of a game, followed by a grand finale and intense boss battle.


As for what I think of Journey. It is the sort of game that portrays a really nice art-style and has quite intuitive gameplay. It's the sort of game that many game developers want to create, because it's all artsy and everything. But I found it a lot like the platforming-ish sections in Uncharted. You look at them, you see what needs to be done, you do it, you see some cool stuff, and you move on. It's linear and pretty, and I would rather be able to have more control over my experience.